Home » Blog » Why LASIK Is A Great Graduation Gift! 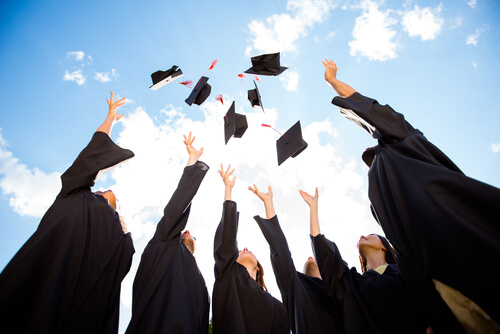 Do you have an upcoming graduate you need to get a gift for? Do they have glasses or contacts?

Have you considered giving them the gift of LASIK? Graduation is a big deal. They’ve worked hard to succeed. They deserve something that will change their life!

When you are trying to pick out a gift, it is important to make it something memorable. It should be something special that transitions for their next chapter in life.

While some people like to give physical or monetary gifts, LASIK is a life changing gift. Allowing your graduate to start off a new chapter in life with clear and strong vision is so helpful. No matter what they are doing after graduation, LASIK can make it easier!

Improved Quality of Life After LASIK

Yes, LASIK improves vision, but it also improves quality of life. We’re not sure that there’s a better gift than that! It’s no accident that 96% of patients who undergo LASIK are satisfied with their results!

They are also willing to have the procedure again. Patients say that their quality of life was as they expected or even better than it was before.

Post-surgery, most patients do not need contacts or glasses. That’s because they have 20/20 vision, if not better after undergoing LASIK!

Getting LASIK is Less Expensive Than Contacts

Paying for LASIK seems like a lot, especially up front. But here’s the thing: LASIK costs less in the long run than contacts. That may seem impossible, but it’s not.

Contacts are an expense that needs replacing on a regular basis. Most people wearing contacts change them at least once a month, if not more.

If you’re wearing dailies, you’re changing contacts out every single day! Contacts are anything but cheap. Most contact lens companies make you buy them in bulk, which makes it more expensive.

And let’s not forget the times when you don’t order them until you’ve already run out. You can add rush shipping to the list that’s expensive too!

On average, most people spend at least $500 a year on contacts, solution, etc. Now, look at LASIK.

The cost depends on where you go, but it’s usually around $4,000 for both eyes. LASIK is a permanent procedure that lets you live glasses and contacts free.

After about five years, LASIK even starts paying for itself! You can’t say that about glasses or contacts, can you?

If you are continuing school or starting a new job, you’ll still need to read and study. It’s a lot easier to pull all-nighters when you aren’t wearing glasses or contacts!

Clear vision is beneficial no matter what you end up doing. Whether it’s about improved self confidence or waking up refreshed, LASIK helps!

If you’re going into the military or police force, LASIK could save your life. Imagine how hard it is to be on the front lines dealing with glasses sliding off your face.

Ready to find out if your graduate could be a good LASIK candidate? Contact South Texas Eye Institute in San Antonio, TX and schedule a consultation!